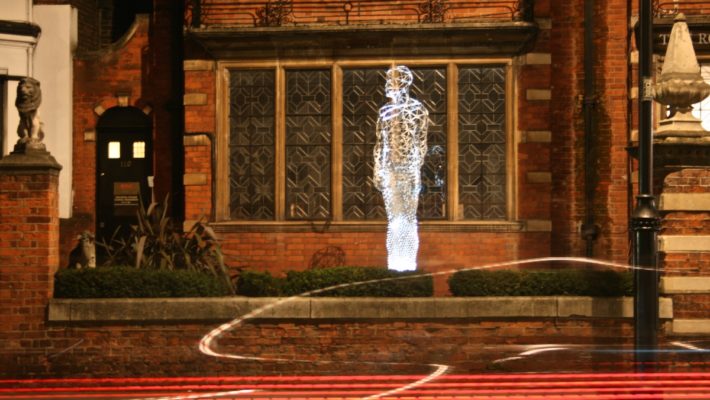 The Royal British Society of Sculptors is delighted to announce Joseph Hillier FRBS’ solo exhibition digitalrendition in which he harnesses the awesome possibilities of digital technologies to create a new body of work that ‘questions the digital revolution we are living through’ using the primal power of the human form as his means of expression.

On the forecourt, we are met with Breathe, a monumental standing figure whose geometric molecular make up dissipates as it reaches further towards the sky, its form gradually dematerialising before our eyes. Moving away from previous work where he used polyhedral or geodesic structures in opposition to the more solid human form, Hillier’s new work internalises the geometric into the fabric of the figure. He is analysing, reducing and interpreting the human form and its movement using 3D motion sensing, printing and animation, positioning sculpture as the vital interface between the digital and the real world. The works in this exhibition are a poignant analysis of humanity’s relationship to our new world of ephemeral data structures and their reconfiguration of time and space. It is Hillier’s way of holding onto and making physical some of the visual information around us which is continually slipping away.

The unique aspect of Hillier’s approach is that he manages to master digital techniques whilst avoiding the traps involved, namely the making of somehow soulless forms. He avoids ‘thinking like a programmer’ to produce works that are vital, in movement and expressive of the human condition, often mimicking the process of machines while painstakingly hand welding laser cut parts.

Hillier masters not only techniques but scale: from the epic In Our Image, 2009 standing at over sixteen metres high to many figures at eighty per cent. of life size, down to the diminutive maquettes of around 15cms high, they are forceful presences.   The hand sized works in particular have a condensed power, invested with an intense consideration of man’s place in and reaction to the new world around him. Hillier enjoys ‘playing with our animal responses to objects’, especially unfamiliar objects, responses which are betrayed most directly and honestly through the body.

In the artist’s words, “humanity grows when we admit we are part of the natural world. Despite our intellect and technology we are still apes. By depicting man as primal, through the most recent and sophisticated bits of technology, the result of our common global culture of things, I hope I can point to something fundamental and unifying about our condition”. 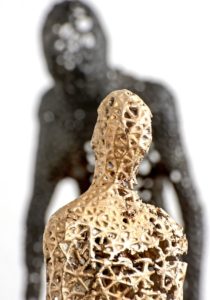 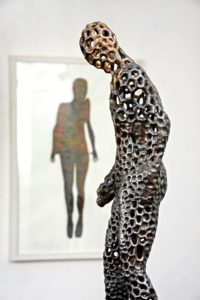